President, protests, civility and plenty to do

There has been an unprecedented and historic rise in civic engagement across the country by ordinary people like you and me. Donald Trump certainly earns some credit for the increased interest in speaking up and participating in the political process, including the rally at the state Capitol on Saturday to protest his anticipated executive order to shrink Grand Staircase Escalante and Bears Ears National Monuments. Congrats to all our Action Utah members from across Utah who participated and helped garner significant national media attention! 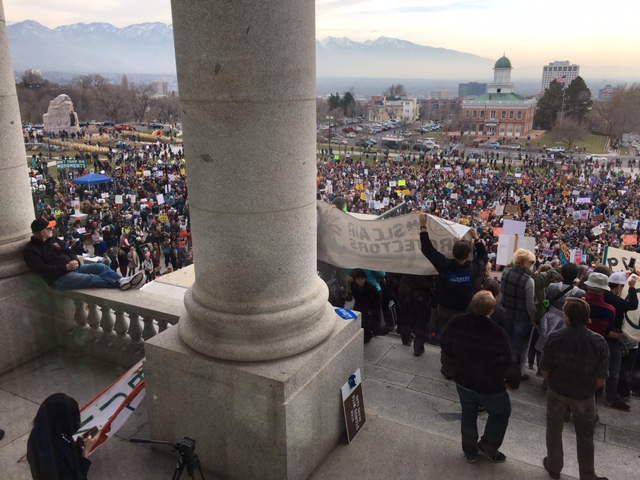 However, not all civic engagement is effective. In the words of the Brookings Institute’s Bradford Fitch, “Regrettably, while increased citizen engagement is laudable, and protest is a cherished American practice and right, these activities alone will not improve the democratic dialogue. Venting may make people feel better, but yelling without listening is usually counterproductive to protesters’ goals.”

At Action Utah it is our philosophy that building bridges, using civil discourse and crossing aisles to find common ground is the most effective way for ordinary people to make an impact and help shape policy that better reflects the beliefs and needs of a majority of Utahns. Recently we called on our members to work toward civility in politics. Now is a critical time to summon civility in order to make the most of your advocacy efforts while Trump is in town and create impact rather than backlash.

One way to promote civility in politics is by recognizing and rewarding politicians when they put people over party and when they have the humility to admit when they are wrong. Congratulations to Action Utah Policy Director, Carrie Butler, for publishing her excellent letter to the editor last weekend in the Deseret News applauding Sen. Allen Christensen’s change of stance on good healthcare policy to insure autistic children in Utah: “Health and Human Services Committee Shows Softening Hearts“.

Street Protest to Stand For Our National Monuments – TODAY 10:45a-1:30p, Salt Lake City. Meet at the protest zone​ at 10:45a and be visible to the press before Trump’s speech begins around 12:30p. The protest zone is the sidewalks south of the Capitol along 300 North between Columbus St. and East Capitol Blvd. The protest will last until approximately 1:30p or whenever Trump’s speech is finished.

Dixie State University’s Southern Utah Climate Discussion: An Educational Public Forum on Clean Air and Climate Solutions – Thurs, December 7th, 7:00p-8:30p at DSU’s Holland Centennial Commons/Library (800E 300S, St George), in the Zion Room (top floor). This event is hosted by Dixie State University Biological and Physical Sciences Departments, the DSU Sustainability Club, DSU students and concerned citizens, featuring keynote speaker and prominent climate scientist, Dr. Robert Davies, Associate Professor of Physics at Utah State University. This event is an opportunity to join the discussion and ask the tough questions about the science of climate change and air pollution: the causes and effects, the dangers and urgency, the solutions and actions we can take. NOTE: A separate student forum will be held at 12p in the Gardner Living Room, and an event for policy makers and their staff will be held the same day. Ask your S. Utah officials to attend.

1. Support conversations about climate solutions in Southern Utah. The latest polling numbers show that 71% of Utahns believe in climate change and 64% think it is exacerbated by human activity. It is high time to normalize conversations about climate solutions in our communities and among our elected officials. Fortunately there is a great event coming up in Southern Utah which aims to do just that!

2. Host an air quality sensor. Researchers at the University of Utah are looking for homeowners, businesses and organizations to host one of their 100 low-cost air quality sensors. The goal of our project is to develop (a) real-time, fine-grained estimates of air quality across Salt Lake City, (b) strategies for integrating measurements of different qualities, and (c) effective ways to communicate this information. To host a sensor, you would need to provide wifi, power, and a sheltered outdoor location. The program will provide the sensors.

5. Support ballot initiatives. Do you care about one of the five ballot initiatives being offered up to voters for the 2018 election? Help them get on the ballot so voters can have the opportunity to decide on them.

Better Boundaries – Instating an independent redistricting commission to decide on district lines in 2020 and beyond.
County My Vote – Eliminating the Caucus/Convention elections system to give more power to the voters.
Our Schools Now – Increasing personal income tax by a small percentage to fund schools by an additional $750 million per year.
Medical Marijuana – Permitting medical use of marijuana to treat a limited number of medical conditions.
Utah Decides Healthcare – Expanding Medicaid and CHIP for tens of thousands of Utahns who currently fall in the health insurance gap.

1. Let Trump and Zinke know how Americans feel about gutting our national monuments.  Today, President Trump is expected to announce an executive order authorizing the largest removal of protections for public lands in history, including a 50% reduction of Grand Staircase National Monument and an 85% reduction of Bears Ears. No president has ever attempted such a radical rollback of protections for our shared national treasures, and legal scholars agree that this action is illegal. The order ignores the majority of Utahns, Westerners and Americans who want to keep existing national monuments in place and the harm that shrinking monuments does to our local communities and state economically, plus immeasurable harm to the historical, cultural and scientific treasures of these lands.

2. Ask your MOCs to include the DREAM Act in the government funding bill. Tax reform has taken the spotlight for the last few weeks in Congress, ending with the Senate’s vote to pass the GOP bill in the late hours of the week. Although the House and Senate must now reconcile their two different tax bills, the main event in Congress this week is deciding on a government funding bill by the deadline of December 8th. There are 10,400 Dreamers in Utah​ alone who contribute nearly $19 million in state and local tax revenue. Let’s make sure the bipartisan DREAM Act is part of that funding bill.

Not sure who your U.S. Representative is? Check here.

We commend ordinary Utahns for their actions of civic engagement — from protesting to calling officials to signing simple online petitions. Action Utah is here to meet you where you are, no matter your party or your experience level. Thanks for letting us help you use your voice to impact policy by giving you tools, education and meaningful actions you can take to make a difference on the issues that matter to you most.

PS – New to Action Utah? Join us here. Like what we’re doing? Please support us​. We rely on donations from members like you to bring you reliable information and actions on a weekly and daily basis!