Your next steps: Marches, caucuses and current events

What’s Next after the March for Our Lives?

Parkland students have started something. In anticipation of Saturday’s march, the Deseret News asked “Is this a moment or a movement?” The response was a record 8,000 people marching with students to Utah’s State Capitol building. An estimated 1,000 marched in a counterprotest. Signals show the March, which had more than 800 sibling marches around the world and over a million participants, will likely have implications in the 2018 midterm elections on both sides of the aisle. 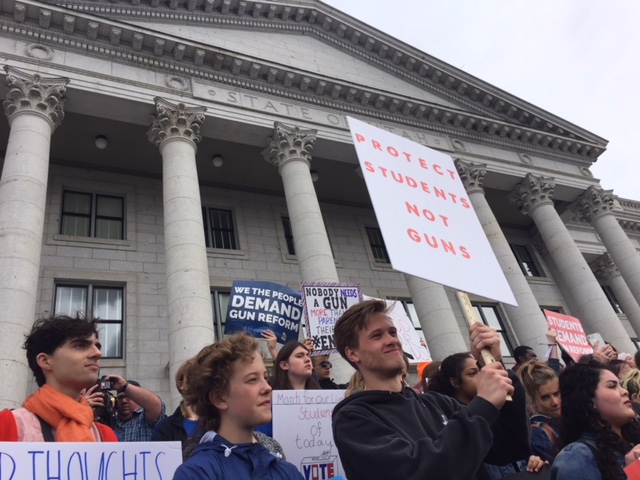 Students and community members who participated in the March for Our Lives stand for something big – not just a moment or a movement, but the belief of an overwhelming majority of Utahns that we must pass some responsible and balanced laws to reduce gun deaths. A 2016 Public Policy poll, for example, shows that 81% of Utah voters support background checks on all gun purchases, while only 13% oppose them. That includes overwhelming majorities of Democrats, independents and Republicans alike.

At the same time, state leaders like Speaker Hughes, Senator Niederhauser and Governor Herbert are openly calling for gun reform and a possible special session to handle new bills that could save lives. Those that have been proposed in Utah by Herbert, the March and others include:

During the recent State Legislative Session, Action Utah worked directly with Rep. Steve Handy on his HB 483 Extreme Risk Protective Order (ERPO), which would have given family members and authorities the ability to file a protective order to temporarily remove guns in extreme circumstances where the gun owner exhibits clear indications of an imminent dangerous threat to themselves or others. This bill will be studied in Interim, and Action Utah will continue to work hard on this much needed piece of legislation and bring you opportunities to impact it.

Such “red flag laws” are being considered in about 20 states right now, with one just passed in Florida and already exist in 5 other states. Why? Because data shows they save lives. And because they hold broad appeal as public health bills proven to reduce gun deaths, including suicides and mass shootings, while maintaining strong evidentiary standards and due process.

That’s why ERPOs are supported by the White House and members of both parties in Congress. In fact, Congress is currently considering a bipartisan ERPO bill, S.2581 Federal Extreme Risk Protection Order Act of 2018, with introduction and a hearing held in the Senate Committee on the Judiciary, but no votes to date. Both Senator Hatch and Senator Lee sit on this committee. (Have you contacted them yet?) Another bipartisan bill in the Senate proposes to financially incentivize states to pass ERPO bills.

1. Support students with next steps after the March for Our Lives. Help students make this moment into a movement to improve school safety.

2. Help petition candidates get on the primary ballot. Caucuses are over and delegates have been voted in. The next step in elections is the conventions (where delegates select their party’s primary candidates) and the signature gathering deadlines for candidates who choose to get on the primary ballot by petition. Petition candidates have precious little time to collect the signatures they need to get on the ballot — a critical step for many candidates who are unlikely to succeed in the caucus/convention path. Signatures are due two weeks before conventions, which vary by party. Contact your party to find out convention dates. The state GOP convention is April 21st. The state Dem convention is April 28th.

3. Sign up for a Day of Action for guaranteed Medicaid expansion in Utah!  Expand Medicaid to 138% of the federal poverty line through the Utah Decides ballot measure. Join Action Utah members collecting signatures on one of our two Days of Action! BONUS: These events are fundraisers for Action Utah – for every 500 signatures we collect, we earn money to continue our work in 2018!

4. Ask Utah Attorney General Reyes to look into unethical behavior. During the State Legislative Session it was discovered that Rep. Mike Noel had failed to disclose conflicts of interest. Now a national ethics group has stepped in to file an ethics complaint. But it will be up to Utah Attorney General Sean Reyes to choose to investigate this possible ethics breach.

Sign this petition from Utah Rivers Coalition detailing the need for an investigation.

5. Help alert community members about the quality of the air! EPA Region 8 would like to invite schools and organizations to join the Air Quality Flag Program this May in recognition of Asthma Awareness Month and for Air Quality Awareness Week (April 30-May4)! Participating organizations raise a flag every day to alert their community about the air quality to help raise awareness about air quality issues and equip people to make decisions that help reduce their exposure to air pollution.

1. Ask our Senators to support bipartisan legislation to reduce gun deaths. Ask Sen. Hatch and Sen. Lee to support S.2581 Federal Extreme Risk Protection Order Act of 2018 and a proposal by Florida Senators Marco Rubio and Bill Nelson to incentive states to pass ERPO bills of their own in order to reduce firearm deaths, including suicides and mass shootings. These bills save lives while protecting individual liberties with high evidentiary standards and strong due process.

​2. Ask our Senators to protect Mueller and the Russia investigation. Ask Senator Mike Lee and Senator Orrin Hatch to support the bipartisan S.1735, the Special Counsel Independence Protection Act, and make a public statement that the firing of Special Counsel Mueller by Trump would be completely unacceptable.

​3. Read and share articles about the legislative battle against the opioid crisis. Congress has begun hyping up its work on a series of legislative efforts to address the opioid crisis given new data that shows the crisis is growing worse. Those efforts, however, fall woefully short of what is needed to make a meaningful impact.

4. Maintain the Hippocratic Oath across the nation. A new proposal by the Department of Health and Human Services (DHHS) expands religious exemptions for providers (hospitals, doctors, nurses, and other individuals and institutions) to deny patients standard medical care based on the providers’ personal beliefs—not based on what is best for the patient. This could lead to discrimination against certain groups and denial of healthcare.

This is the season for renewal and revitalization. Take inspiration from students across the nation who have spoken up so eloquently in defense of their lives and renew your commitment to speaking up for something you care about. Community engagement can take many forms — from loud and massive in scale to quiet and individual — but it is all important. Pick one or two issues that matter most to you and make a plan to take action regularly to impact them. At Action Utah, we’re here to help you every step of the way!

Action Utah is a nonprofit organization, and we rely on financial contributions from our supporters to boost civic engagement in Utah through education, training and advocacy opportunities. Your gift will allow us to continue our work toward elevating the voices of Utahns in policymaking. Please consider making a gift today!