Earth Day, conventions and calls to Congress: What will you do this week?

Earth Day​​ is coming up on Sunday, April 22. According to the Utah Foundation’s 2016 Priorities Project​, air quality, water and the environment all fall in Utah’s top 10 priorities. 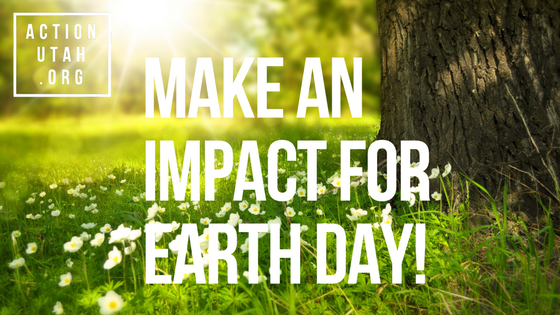 That’s why Action Utah tracks and develops policy to promote environmental stewardship — like HCR007, the second climate resolution ever to pass in a red state. We’re working on more great policies, like adopting the Zero Emission Vehicle (ZEV) program and rural renewable energy development, for 2019 and will continue bringing you opportunities to make a difference!

This week is a great time to think about the things you can do yourself at home or in your community to be a good environmental steward.

1. Do your part for Earth Day – Earth Day is a series of international events bringing awareness and action to environmental stewardship.

2. Ask Congress to protect SNAP. Last week the House unveiled the 2018 Farm Bill,​ traditionally a bipartisan bill. But this year’s bill is highly partisan and highly controversial for including significant changes to SNAP​ (formerly Food Stamps). The proposed changes would expand work requirements to include older Americans (ages 50-64), make it harder for states to feed people in times of high unemployment, and re-impose asset limits that create barriers to participation and a disincentive to save. Click here​ to take action.

Thanks for letting us help you make a difference!

Every day Utahns are impacting the issues that impact them and their families and communities. Action Utah is honored to be working alongside thousands of members who want to get involved — even just a little bit — and helping you take actions that make a difference. Thanks for letting us be a part of your success!

Action Utah is a nonprofit organization, and we rely on financial contributions from our supporters to boost civic engagement in Utah through education, training and advocacy opportunities. Your gift will allow us to continue our work toward elevating the voices of Utahns in policymaking. Please consider making a gift today!